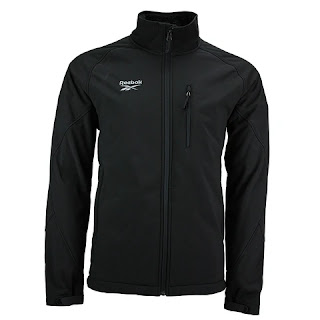 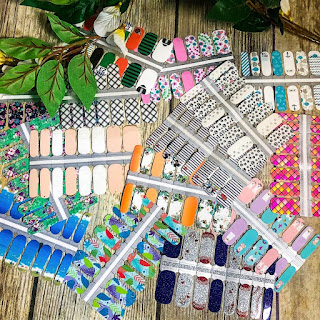 Check out these Trendy Nail Wraps for ONLY $3.99!
These are perfect if you hate polishing your nails just to have them smudge no matter what you do! Easy to apply and they will stay on for weeks.
Post a Comment
Read more 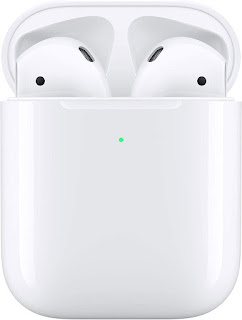 HURRY over to Amazon where you can score these Apple AirPods with the Wireless Charging Case for only $149.98 shipped (Retail $199.99)!
These Wireless AirPods play music as soon as you put them in your ears and your music pauses as soon as you take them out. Use them to make calls, get directions, or change a song, all by easily activating Siri by double-tapping the AirPods.
Post a Comment
Read more 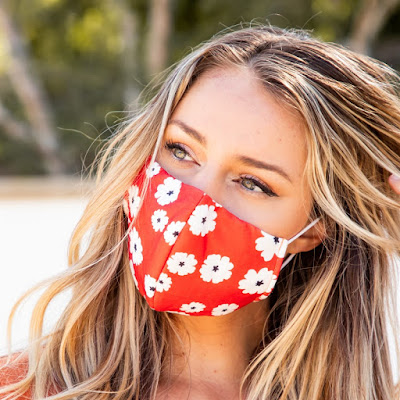 Check out these Reusable Face Masks for ONLY $6.99!
Our stylish reusable masks are washable & so comfy! With many patterns to choose from, everyone can express their unique style while keeping safe in public.
Keep up with the coupons, discounts, and freebies, Subscribe Now! 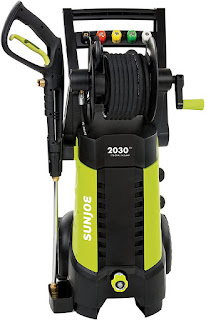 Today only, while supplies last, get this Sun Joe Electric Pressure Washer with Hose Reel for ONLY $124 (Retail $229.99)!
POWER AND PERFORMANCE UNDER PRESSURE! Tackle your toughest home, outdoor and auto cleaning projects with ease! Packed with a powerful 1800-Watt/14. 5-amp motor, the Pressure Joe SPX3001 generates up to 2030 PSI of water pressure and 1. 76 GPM of water flow to remove road tar, tree sap and insect splats from cars, grease deposits from concrete, heavy mildew, oil and rust stains, caked on mud, and other stubborn yard and garden gunk and grime. The Pressure Joe SPX3001 comes equipped with an extra large 40. 6 fl oz. (1. 2-liter) onboard detergent tank - perfect for blasting dirt and debris off your windows, cars, RVs, boats, ATVs, trailers, siding, barbecues, and more. Its 34-inch extension spray wand rear wheels provide maximum maneuverability and easy access to tight spaces such as beneath decks, behind grills, gutters and patio furniture as well as the undersides o…
Post a Comment
Read more 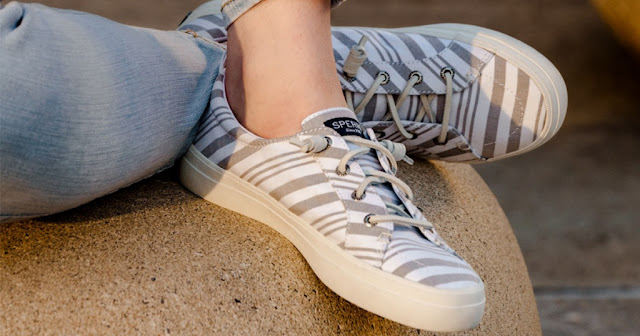 For a limited time, head over to Sperry where they are offering awesome deals on select styles with prices starting as low as $29.98!
You could also score up to 60% off last chance styles on Sperry Outlet!   PLUS...Shipping is FREE on ALL orders!
Check out these deals: 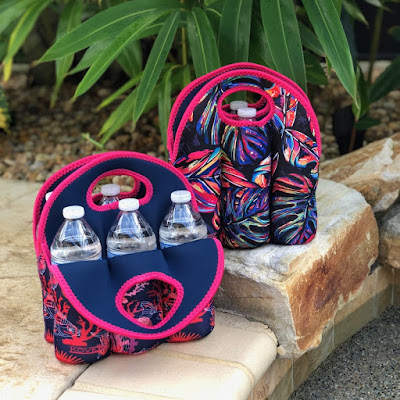 Head over to check out these 6-Pack Carriers for ONLY $12.99 Shipped!
Perfect gift for beer lovers, picnics, tailgating, or the beach. Whether you are bringing some of our favorite beverages to a gathering with family and friends or transporting bottles back from the grocery store, Koverz Neoprene 6-Pack Carriers will protect your precious cargo and keep the bottles/cans cool until you reach your destination!
Keep up with the coupons, discounts, and freebies, Subscribe Now!

Head over to Amazon where you can score up to 50% off select Crayola Multicultural Colors Collection items!
This collection makes it easier for kiddos to color themselves, their families, and their friends! Be sure to browse them all here!
Check out this deal!
Crayola Multicultural Colored Pencils 8-count Only $2.38 (regularly $4.99)
Keep up with the coupons, discounts, and freebies, Subscribe Now! 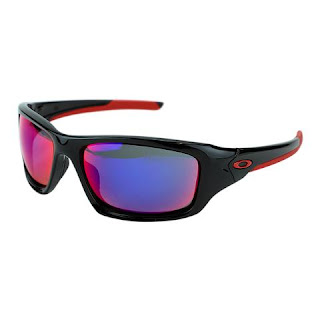 Head over to get a pair of these Oakley Men's Valve Sunglasses for ONLY $56 Shipped (Retail $143) with promo code PZY56 at checkout.
On the cutting edge between sport and lifestyle, Oakley Valve is for active lives that demand both performance and pace-setting style. Street resistant O Matter frame materials makes it lightweight while Unobtainium components increase grip with perspiration. If you're looking for a go-anywhere, do-anything sunglass that blends street smarts with brilliant innovation, this is it.
Expires: 05/24/2020
Post a Comment
Read more 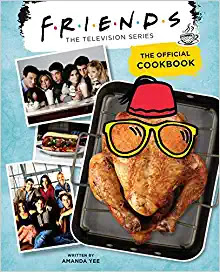 Scheduled for a September 22nd release, the Friends: The Official Cookbook is sure to bring a smile to any Friends fan's face!  The 90-page book contains more than 70 recipes inspired by the show's characters and food from some of its most memorable episodes.
From the publisher:
Whether you're a seasoned chef like Monica Geller, just starting a catering business like Phoebe Buffay, or a regular old food enthusiast like Joey Tribbiani, Friends: The Official Cookbook offers a variety of recipes for chefs of all levels.
Friends: The Official Cookbook contains full-color photography of appetizers, main courses, drinks, and desserts. It's full of food that fans will recognize from the show, like Monica's Friendsgiving Feast, Rachel's Trifle, Just for Joey Fries, Chandler's "Milk You Can Chew," Phoebe's Grandmother's Cookies, and Monica's The Moist Maker sandwich.
Preorder now on Amazon, and your cookbook will ship when it's released on S…
Post a Comment
Read more

Amazon Coupon Codes Round Up May 22nd 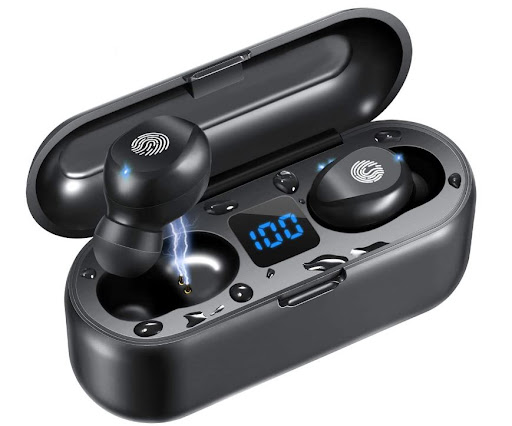 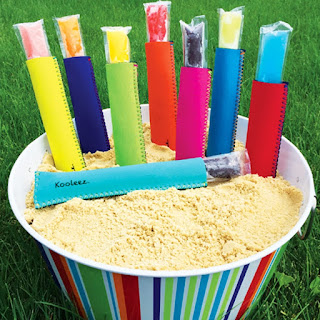 Check out this Kooleez Ice Pop Sleeves 8 Pack for ONLY $11.99 Shipped!
Say goodbye to freezing fingers while your kiddos enjoy their favorite icy treat! Also, nothing goes better with school lunches than Go-Gurts. Just freeze your Go-Gurt and slip it in the Kooleez sleeve to keep it chilled and cold for hours until lunchtime. Freezer pops can now be enjoyed as a refreshing snack all year round. No more freezing cold fingers or wrapping and wasting paper towels. Your kids will thank you, trust me!
Post a Comment
Read more 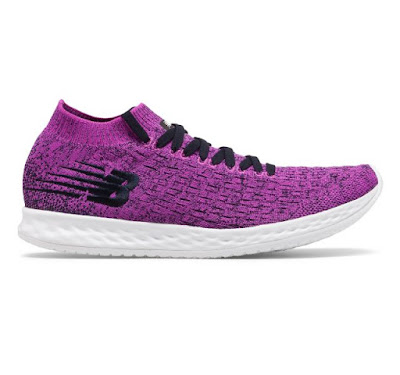 Today ONLY, while supplies last, score this pair of New Balance Women's Fresh Foam Zante Solas Running Shoes ONLY $29.99 (Retail $99.99).   For a limited time, shipping is free on all orders.
We packed our New Balance Fresh Foam Zante Pursuit running shoe for women with technology to help enhance your run, based on data from real-life runners. The result: A soft and responsive Fresh Foam midsole with laser-cut perforations that delivers a fast feel without sacrificing cushioning. Plus, an innovative HypoKnit upper offers soft yet strategic support from heel to forefoot. This lightweight women's running shoe features a Fresh Foam midsole for a smooth underfoot feel.
SHOP NOW!
Keep up with the coupons, discounts, and freebies, Subscribe Now! 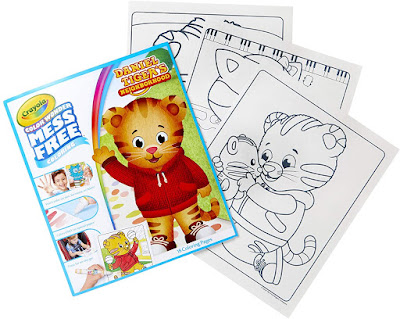 Today only, while supplies last, Save up to 65% on Select Spring Preschool Toys!
Choose from Melissa and Doug, Battat, Crayola, and MORE!
You can score this Crayola Color Wonder, Daniel Tiger's Neighborhood for ONLY $2.99!
Post a Comment
Read more 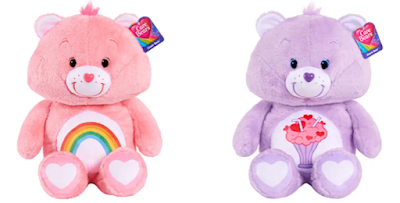 Amazon: Save up to 65% on Select Spring Toys - Melissa and Doug, Crayola, Disney, and MORE 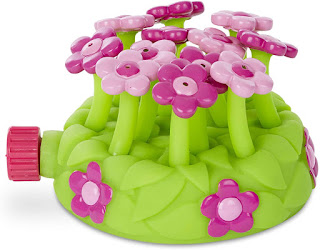 Today only, while supplies last, Save up to 65% on Select Spring Preschool Toys!
Choose from Melissa and Doug, Battat, Crayola, and MORE!
Shop HERE!
Post a Comment
Read more 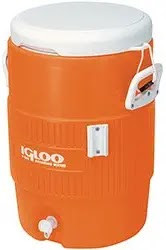 Head over to Walmart.com where you can score this highly rated Igloo 5-Gallon Heavy-Duty Beverage Cooler for just $18.88 (regularly $25)!
This seems like a great deal as Amazon currently has the same cooler priced at $22.99.
From parties to camping, this insulated 5-gallon cooler is perfect for storing and serving up cold drinks wherever you go! It features a push-button spigot that makes it easy to get yourself a drink and a pressure-fit lid to prevent spills and keep unwanted dirt and bugs from getting in your beverage. Plus, the seat-top lid gives you an instant seat wherever you go!
Post a Comment
Read more 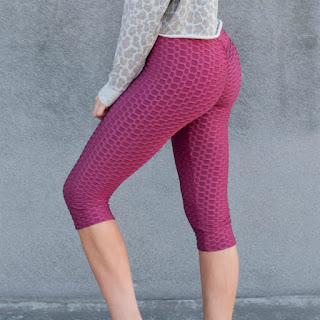 Head over to check out these Booty Lifting Anti Cellulite Capri Leggings for ONLY $12.99!
Enhance your daily look with this miracle shapewear! These Anti-Cellulite Butt lifting leggings will accentuate your curves, slim your silhouette, and hide that cellulite. Bend, squat, and lift with confidence. Wear this with a comfy top or sports bra, and a shoe of your choice and you will be set for the day.
Post a Comment
Read more 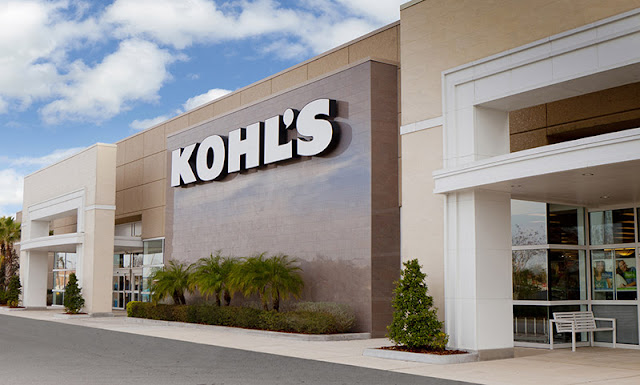 Amazon Coupon Codes Round Up May 21st 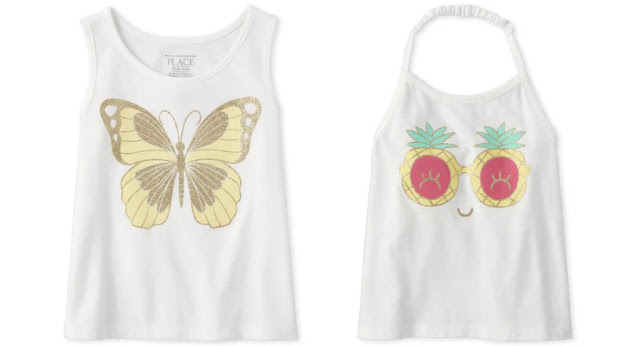 Head over to Kohl's where they have The Big One Disney Themed Beach Towels on sale for $9.99 (regularly $23.99). There are also a bunch of cute summer prints included in this sale which are perfect for the beach or pool this summer!
Even better, through May 25th, you can score $10 off a $25 purchase when you use promo code SERVICE10 at checkout!
Here's the deal:
Buy 3 The Big One Printed Beach Towels $9.99 each (Retail $23.99) Total = $29.97 Use promo code SERVICE10 ($10 off $25) Final cost $19.97 total – that's just $6.65 per towel
Doing some additional shopping? Score 20% off furniture, outdoor decor, mattresses, and more when you use promo code REFRESH20 at checkout!
Plus, through May 25th, for every $25 you spend, you'll get $5 in Kohl's Cash which will be redeemable from May 26th through May 31st!
Skip the wait time for shipping and opt for Kohl's new Curbside Pick-Up instead! Place your order online, watch for an email that your order is ready (usually wit…
Post a Comment
Read more 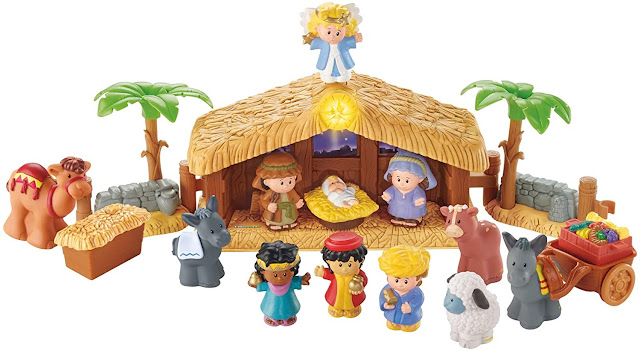 Head over to get this Fisher-Price Little People Christmas Story for ONLY $21.99 (Retail $33.99)! Now is a great time to buy it and stash it for next Christmas!
With the Little People A Deluxe Christmas Story play set, little ones can bring the magic of the nativity to the palms of their hands! Push down on the angel to hear a sweet song and make the light-up star shine bright. 12 Little People figures, 5 accessory pieces and the sweet baby manger round out this perfect holiday play set. You and your family will love recreating this beautiful story in the comfort of your home.
Post a Comment
Read more 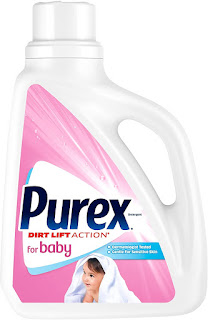 Right now over at Amazon you can score this Purex Liquid Laundry Detergent for Baby 75-ounce bottle for just $3.25 or less shipped when you opt to Subscribe and Save.
This detergent is hypoallergenic and dye-free, so it's ideal for baby's sensitive skin. It also has a light fragrance that keeps baby's clothes smelling fresh and clean.
Purex Liquid Laundry Detergent for Baby 75oz bottle $3.42
Opt to Subscribe and Save (5%- 15% off + free shipping)
Final cost just $3.25 shipped (5% off) or $2.91 shipped (15% off)
Post a Comment
Read more 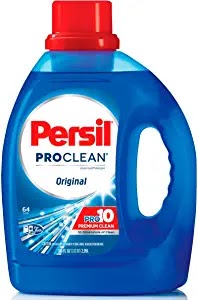 For a limited time, head to Amazon where you can score $5 off 2 select household items – no promo code needed as discount is automatically applied at checkout.

Amazon Coupon Code Round Up May 20th 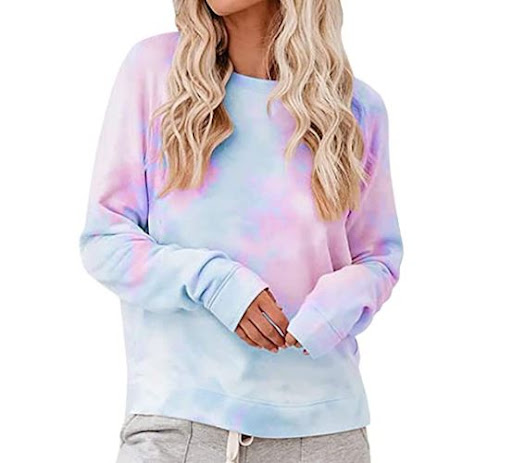 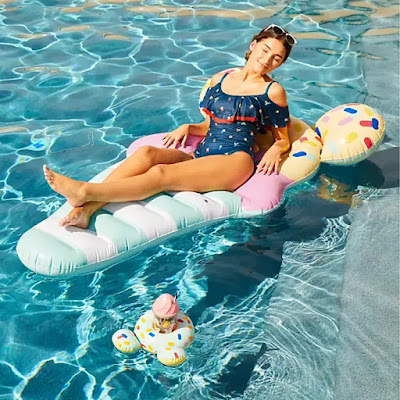 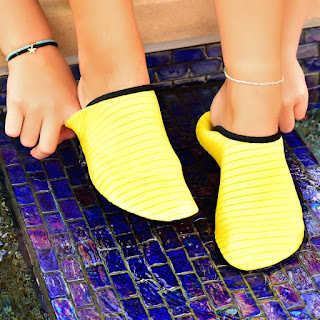 Check out these Neoprene Water Shoes for ONLY $14.99 Shipped (Retail $29.99)!
With hotter temperatures and sunny days on their way, outdoor activities such as hiking, kayaking, paddling, and surfing will be soon taking over our downtime and weekends. A sturdy pair of water shoes is essential if you'd like to keep your feet comfortable while enjoying your favorite water sport.

These neoprene shoes have a slip-on quick-drying upper construction and a sturdy rubber sole so you can enjoy your favorite water activities worry-free.
Post a Comment
Read more 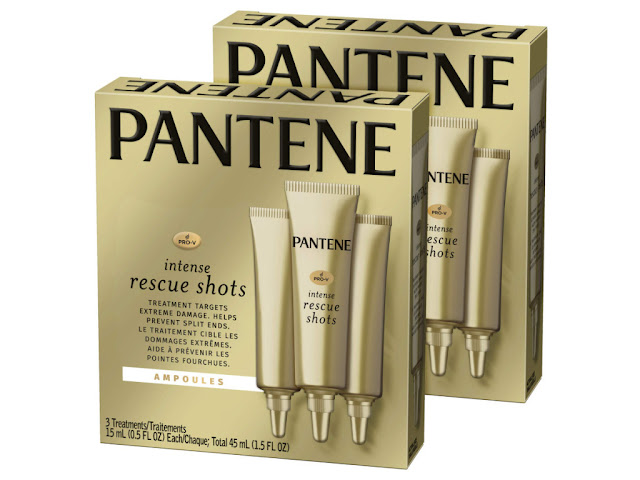 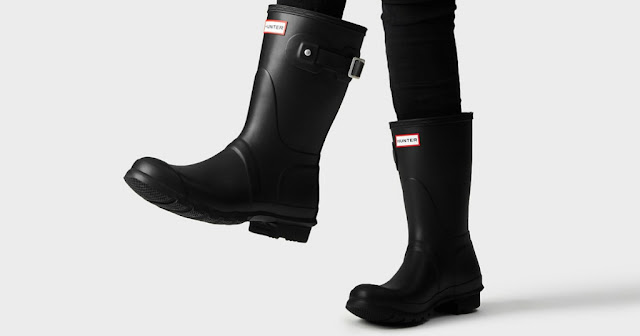 Today, May 20th only, hurry on over to Amazon where they are offering up to 60% off Women's Hunter Boots.
Choose from multiple styles and colors but make sure you grab them quickly because they are selling out fast!
Post a Comment
Read more 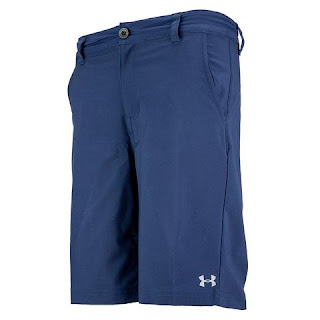 Head over to get a pair of these Under Armour Boy's Standard Stretch Golf Shorts for ONLY $14.99 Shipped (Retail $40) with promo code PZY1499A!
Made with lightweight, breathable woven fabric, the Under Armour Boys' Standard Stretch Golf Shorts are just what your young golfer needs to stay cool, comfortable and focused during warm weather.
Expires: 05/22/2020
Post a Comment
Read more 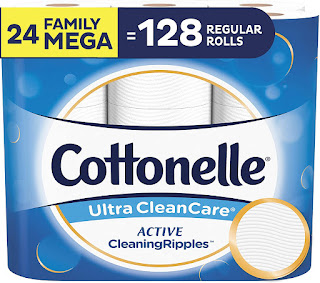 Head over to Amazon where they have toilet paper available – limit one pack per customer.Note that while these are not on sale, they have been hard to find lately so you may want to order while you can.Cottonelle Ultra CleanCare Soft Toilet Paper 24 Family Mega RollsJust $25.18 shipped